Often mistaken and treated as gastritis.

What is the Gall Bladder?

The gall bladder is a pear-shaped organ situated in the right side of the upper part of the abdomen, that stores and concentrates the bile produced by the liver. It is attached to the undersurface of the right lobe of the liver. This concentrated bile is released from the gall bladder after food ingestion, especially fatty meals and helps indigestion.

Gall bladder can be affected in different ways:

What are Gall Stones?

What are the causes of Gall stones?

It is uncertain why some people develop gallstones. It has been seen that females are more prone to form gallstones than men .Excess estrogen from pregnancy , hormone replacement therapy or birth control pills may increase the cholesterol levels in the bile , slow down gall bladder emptying and can lead to gallstones .Obesity is another contributing factor . People who have hereditary blood disorders like haemolytic anaemia, sickle cell anemia and hereditary spherocytosis (in which too much bilirubin is formed ) are more likely to develop pigment stones . Diabetics, people having high triglyceridemia are also at a risk of developing gall stones.

What are the symptoms of Gallstones?

GastritisThe most common symptoms of gallstone disease include abdominal bloating, belching, indigestion and nausea. It is often treated as gastritis in many people until an ultrasound scan of the abdomen reveals gall bladder stones as the culprit.

Pain in the upper abdomen , often more to the right and can move to the right shoulder blade or shoulder tip. The pain may come after meals, particularly fatty meals. Many people have woken up in the middle of the night with severe, unbearable pain, sometimes even mimicking a heart attack. These could be simple biliary colics or if the stone gets stuck in the cystic duct, it can cause swelling & infection if the GB called acute cholecystitis.

Jaundiceis another way in which gall stones can present. This happens when the stone moves from the gall bladder and enters into the bile duct, thus blocking the passage of bile from the liver to the intestine.

Pancreatitis: The patient may suddenly complain of severe pain in the epigastric or umbilical region radiating to the back, relieve partially only in sitting position and bending forward. This happens when the stone moves down further from the common bile duct blocking the pancreatic duct also. In these cases, the patient will also have jaundice, & pancreatitis along with acute cholecystitis.

Silent stones:Often the gallstones may remain “silent “and not cause any symptoms at all and are accidentally detected during a routine heath up.

How Gallstones are diagnosed ?

Ultrasound of the abdomen is the most common specific and sensitive test to diagnose gallstones. Along with the ultrasound, it is always better to get a liver function test done to make sure that no stone has slipped into the common bile duct, and also do a complete blood count to rule out any infection.

What is the treatment for Gallstones?

Unlike kidney stones wherein we remove just the kidney stones when a person develops gall bladder stones the standard treatment is to remove the gall bladder along with the stones. Earlier, it was done through large 10cms to 14 cm incisions (open surgery) , but now with the advent of laparoscopy, it is being done through half cms and 1 cms incisions. The procedure is called laparoscopic cholecystectomy (Keyhole Surgery). As it is done by laparoscopy, recovery is quick and only one day of hospital stay is required. 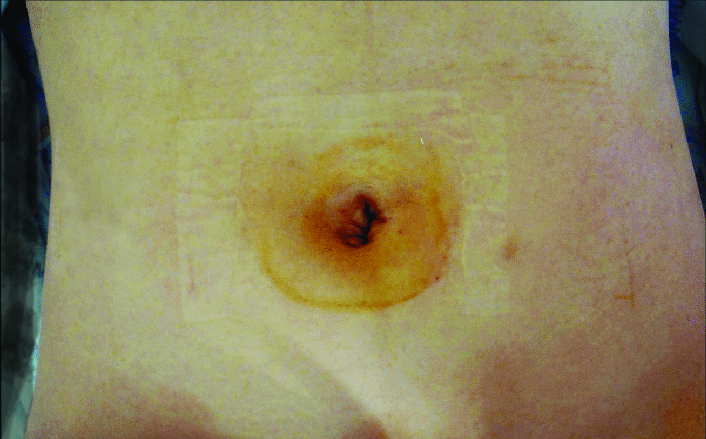 Is there an alternative to Surgery?

Not really. Gall stones do not go away on their own . Non-surgical treatments usually do not work and are offered to patients who are unfit to undergo surgery. Some medicines do exist that may dissolve gallstones. But, stones usually recur after these treatments.

What happens if Gallstones are not treated?

Gall stones can block the flow of bile out of the gallbladder causing it to swell, called Cholecystitis. Gall stones may slip out of the gallbladder into the bile duct and can block the flow of bile causing jaundice, or they may cause acute inflammation of the pancreas called pancreatitis. Once the gall stones have slipped and blocked the bile duct, it becomes necessary to remove the stones in the bile duct by a procedure called ERCP and then proceed with laparoscopic cholecystectomy. If you experience severe abdominal pain, fever with chills, jaundice occult doctor immediately. Gall stones also are a risk factor for the development of gallbladder cancer. 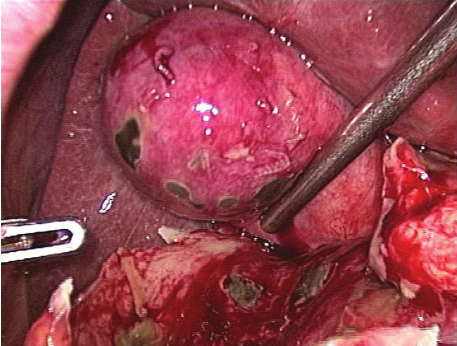 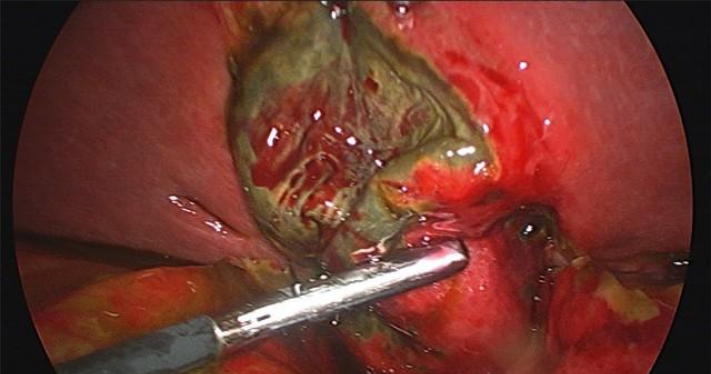 Laparoscopic Cholecystectomy is performed under general anaesthesia. In laparoscopic surgery, a telescope attached to a camera is inserted through a small incision that is made under the patient's belly button. Three other small cuts are made (each no larger than the diameter of the pencil eraser) in the upper abdomen. The gall bladder is separated delicately from its attachments and then removed through one of the openings.

What if the gall bladder stone gets stuck in the CBD (common bile duct) ?

This can be easily managed laparoscopically. The stone can be removed using a basket which is introduced through an incision made on the common bile duct and the procedure is called laparoscopic CBD exploration. Following this, the gall bladder is also removed

What are the benefits of Laparoscopic Cholecystectomy ?

Am I a candidate for Laparoscopic Gall Bladder removal?

In experienced hands, all gall bladder stone/ gangrene patients can be treated laparoscopically i.e by laparoscopic cholecystectomy. The magnification and clarity of vision that laparoscopy provides are phenomenal.

Does it affect one’s digestion if the gallbladder is removed ?

The removal of the gallbladder seems to not affect the digestive process in the vast majority of patients as the bile trickles steadily into the gut directly from the liver even after Laparoscopic cholecystectomy and helps to digest the fatty foods. One should be able to eat normally after the operation.

How many days should I stay in the Hospital ?

What are the precautions to be followed after Surgery?

Activity level is generally restricted by patients comfort level. Patients will be able to return to normal activities as early as 2 days after the surgery to up to a week after surgery, including resuming office work, driving, light lifting and working.

Gall bladder stones are formed by cholesterol and bile salts. They could be purely cholesterol stones, pigment stones, or a combination of the two. They could be solitary or multiple, small, or large. The exact reason for the formation of gallstone is unknown. However, it has been found that females are more prone to gallstones than men because of excess estrogen from pregnancy. Women on birth control pills and hormone replacement therapy have a predilection to the formation of gall stones. Obesity is also one common causes of gall bladder stones. Other ailments like diabetes or hereditary spherocytosis can also become a reason for gall bladder stones.

Gall stones can cause a wide array of problems ranging from severe pain to gall stone pancreatitis which could be life threatening in some cases. This happens when the stone slips from the gall bladder into the bile duct and block the pancreatic duct. The slipping of the stone is totally unpredictable and hence it is advisable to attend to the gall stones even when they are not causing much problem. Hence, timely surgery for gallstones is necessary for effective treatment and faster recovery from gallstones.

Majority of the obese people are seen to have gall bladder stones when they undergo an ultrasound scan on a health check up. Ultrasound testing is a specific and common test that confirms the presence of gallstones, easily accessible to all and non invasive diagnostic test.

Dr Tulip’s Hospital Bangalore is a reputed, top-notch treatment center where expert doctors treat patients having gall bladder stones using keyhole surgery and single incision surgery requiring a hospitalization of just 24 hours if surgery is done prior to the onset of complications. One may get back to work within 2 days of the surgery. If complications set in, hospital stay will need to be extended.

Doctors at Dr Tulip’s Hospital will give you expert treatment and solutions even for the most difficult gall bladder stone cases due to the experience in advanced laparoscopy and the state of the art equipment it has.